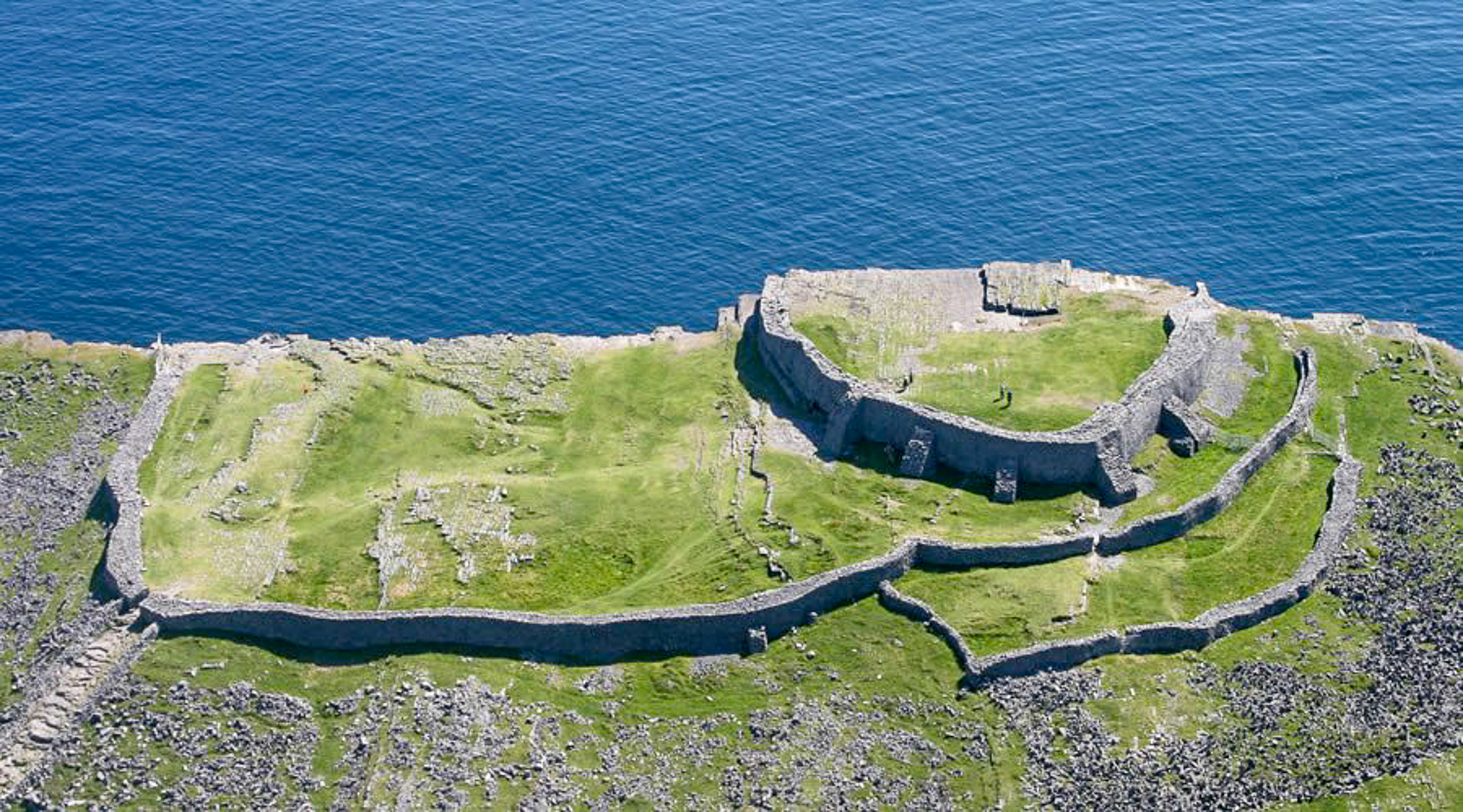 The Aran Islands are located just off Galway and Doolin. A true Irish experience awaits, locals speak Irish as well as English in a setting of Celtic churches of historical significance including World Heritage site Dun Aonghasa which is set on dramatic 300 ft cliff edge. The Aran Islands are a great choice for special holiday or break and has various accommodation options including Bed & Breakfasts, Hotels, Hostels, & Ireland’s newest Glamping establishment.

Add to My Tour Quote

Inis Mór is the largest of the three Aran Islands (7,635 acres) and includes several ancient stone forts and churches among its antiquities. Most impressive of the stone forts is Dun Aengus. It is semicircular, resting on the edge of a perpendicular cliff rising 100 metres out of the ocean. The fort consists of an inner court 50 metres across surrounded by a wall six metres high and five metres thick at the base. Outside is a rampart, a defence formed by sharp-pointed stones set closely together. Dun Aengus superb position and it’s structural perfection, have prompted many experts to pronounce it one of the finest prehistoric monuments in Europe. There are about 1100 inhabitants on Inis Mor making it by far the most populated of the islands. The main village on the island is Kilronan, which has a quite large new harbour that accommodates a vast amount of tourist travel to the island. The best way to see Inis Mor is to hire a bike or take a Pony & Trap. You can also go bus tour which is also recommended.

Perched spectacularly on a cliff overlooking the Atlantic ocean, this is the largest of the prehistoric stone forts of the Aran Islands. It is enclosed by three massive dry-stone walls and a “chevaux-de-frise” consisting of  tall blocks of limestone set vertically into the ground to deter attackers. The fort is about 900m from the Visitor Centre and is approached over rising ground. Access for visitors with disabilities to the Visitor Centre.  As much of the tour is outdoors, visitors are advised to wear weather protective clothing and shoes suitable for walking over uneven terrain. Please note that Dún Aonghasa is a vulnerable site. Visitors are therefore asked to co-operate with our effort to protect this monument by not interfering with this site in any way.

The cliffs of Inis Mor stretch allong along the entire western side of the island and form a spectacular sight. Ideal mostly for walkers and cycling to get to the cliffs are generally isolated and one should exercise caution when in this part of the island.

(LOCATION FOR THE REDBULL CLIFF DIVING)

This is a remarkable feature and a major attraction for the visitor. I has become just as popular as Dun Aonghasa with visitors as it is part of the Red Bull Cliff Diving Competition. It is a natural rectangular shaped pool into which the sea ebbs and flow at the bottom of the cliffs south of Dún Aonghasa on Inis Mór. Access to it is gained by walking east along the cliffs from Dún Aonghasa or more easily by following the signs from the village of Gort na gCapall.

The Seal Colony has in recent times become one of  the more popular attractions on Inis Mor Island. It is located on the coastal road 10 minutes cycle before Kilmurvey beach. The advantage of cycling here is that you can meander and be at one with nature.

On a good day, in this natural habitat with a favorable tide you will come across numerous seals bathing. The scene is enchanting. Adjacent to the seal colony is a small lake that has wild swans, ducks lurking in the reeds as well as many rare birds. This is a must see for bird watchers.

Kilronan village is a most lively little village. It is set on Kilronan harbor with it’s beautiful pier which lays berth to numerous yachts and fishing boats. Here you will also find Currach’s which are traditional boats as well as Galway Hooker’s which are also uniquely Irish boats. The village also is host to a the Aran Sweater Market and has a small supermarket and with an ATM machine and a couple of traditional bars.

This impressive cliff side ruin on the southern side of the island, like Dun Aonghas is gaurded by natural defences and by a Cheavaux – de – frise. The Black Fort whilst not as popular as Dun Aonghas has a similarly impressive presence.

THE BEACHES OF INIS MOR

The three islands are noted for their sandy sheltered beaches and interesting shorelines. On Inis Mór there is a blue flag beach at Cill Mhuirbhigh which is safe for swimming(cf. Map). In Inis Oírr there is an idylic cove at the main landing pier known as An Trá Mór( The big beach). In Inis Meáin there are numerous sandy coves. There are also storm and block beaches throughout the islands evidence of the power of the Atlantic.

Teampall Chiaráin is in the village of Mainistir (meaning monastery). It is said to have been founded by St Ciarán of Clonmacnoise who studied here under St Enda before sailing up the Shannon to establish his foundation at Clonmacnoise. The church which dates from about 12th century stands on the old site of Mainistir Chonnacht. Several cross-decorated slabs stand near the church. These may be old Tearmann crosses( boundary crosses). The most striking one is immediately to the east of the church. It is well decorated and has a hole in it indicating it may have been used as a sundial. Traditionally islanders draw a handkerchief or scarf through the hole for luck or fertility.

THE LIGHTHOUSE AND DUN EOCHAILL

This fort is found in the middle of the island south of the village of Eochaill from which it gets its name. Eochaill meaning Yew wood. The fort is circular and consists of two terraced walls. Exact dates are not known but it is thought to be somewhat later than Dún Aonghasa possibly late Iron Age. It is easily accessed from the main road. Nearby are the remains of an early nineteenth century Light House which while on the highest point of the island was too badly placed to ever have been of any effective use.

This fort is found in the western head of the island in the townland of Eoghanacht south of the village of Sruthán. It consists of a circular single two terraced wall of an impressive height. There are the remains of several Clocháin(stone houses) inside. The fort takes its name from the Eoghanacht tribe of Munster who were associated with the island in Medieval times. Exact dates are not known but it is probably Iron Age.

Situated in the west of Inis Mór at the village of Eoghanacht the seven churches or Dísert Bhreacáin as it is also known was for centuries one of the biggest monastic foundations and centres of pilgrimage along the west coast of Ireland. Breacan is believed to have come here in the earliest period from Kilbrecan near Quin in County Clare. Tradition on the island has it that his foundation rivalled St Enda’s foundation in the east of the island. Indeed the two saints are held to have eventually agreed to divide the island between them. Although termed ‘ the seven churches’ there are in fact only two churches with a number of domestic buildings. The title seven is possibly an allusion to the pilgrimage circuit of Rome which incorporated seven churches.
Teampall Bhreacáin( St Brecan’s Church) is a large multi period church c. 8th-13th century. It contains fine massive masonary with an impressive arch, nave and chancel. An inscribed stone in the west gable reads ‘ OR AR 11 CANOIN’ ‘ Pray for the Two Canons’. Teampall an Phoill ‘ (the Church of the Hollow) is a 15th century church smaller and simpler in style. The remains of a number of penitential beds and fragments of decorated crosses are also to be found on site most notably Leaba Bhreacáin and leaba an Spioraid Naoimh. There are also a number of interesting cross inscribed stones and graves in the south east corner of the site. One of these has the words ‘ V11 ROMANI’ The Seven Romans written on it and another has Tomas AP( Thomas the Apostle). There used be two Holy Wells -now enclosed-Tobar an Spioraid Naoimh and Tobar Bhreacáin on site.

These are holes in the ground at the top of the cliffs and have tunnel like channels that lead down to the water. On days when the seas are rampant water will rush up and create a spray on the mainland in a similar fashion to the puffing of a whale.

There are no reviews yet.

Be the first to review “Aran Islands” Cancel reply 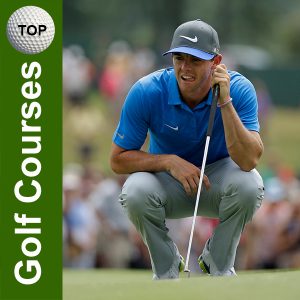 Facebook Twitter Youtube Instagram
Thanks, Atlantic Way Touring & our driver David for the holiday experience in Ireland. We have had a fantastic tour which has met all our expectations of this fabulous country.
James
Highly experienced staff led to excellent tour and travel choices which resulted in a holiday of a lifetime.
Bridgette
Good tour for a short time period, we felt like we saw and did a lot in the week we had.
Bob Schmidt
Ronan our guide was fantastic. Very smoothly run tour. So glad we completed this trip and saw the Wild Atlantic Way. Highly highly recommend.
Paul & Shelly
We have no hesitation at all in thoroughly recommending Atlantic Way Touring for any travel arrangements in Clare based on our very happy experience.
Orlana & Gerry
You guys are so helpful and efficient that I felt so relaxed that everything would go ok and you know what it went fabulous. Many thanks again Diane.
Diane
Very Well organised tour with all details taken care of. We had a comfortable, relaxing and wonderful holiday and were able to see the country in depth. Thanks James, for making our trip so memorable and enjoyable
Richard & Jane